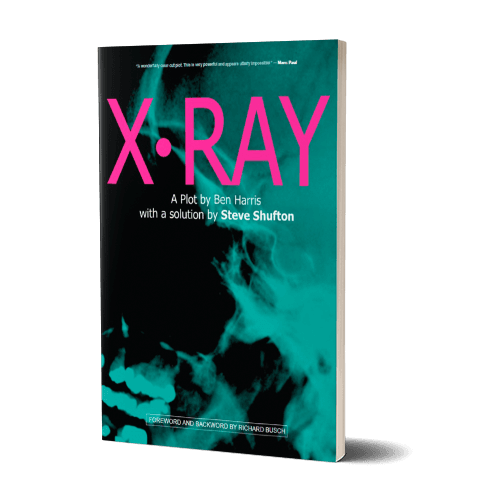 When I was young, my uncle Peter fooled me badly with a simple X-Ray Vision stunt. It played serious havoc with my developing mind. Pete had been using his X-Ray Vision to “see through” the table top in order to identify how many fingers I was holding aloft. He hit it time and time again. I was later crushed, when dad explained that he’d simply been coding the information, to my uncle, via surreptitious foot tapping. In due course it was I who was performing the demonstration, and I’ve been fascinated with the X-Ray Vision plot ever since.

My one man show, HELLucinations, is my core act-the one I fall back upon for all of my highly paid professional work. Purporting to replicate the demonstrations of the legendary Dr. Elmer William Bishop, the show commences with some direct and perplexing “card reading” and then quickly moves through a series of unbelievable-looking demonstrations of supposed X-Ray Vision. These, among other demonstrations, include “seeing through” a heavy iron box to reveal which card a spectator has reversed in the deck, AND IT’S EXACT POSITION in said deck. It is a demonstration repeated over and over, the conditions becoming more stringent every time.

The show, presented in all seriousness, can play for thirty minutes or an hour and a half. It leaves the audience completely convinced that I have the powers of X-Ray Vision-even with a full disclaimer. This, my friends, is real bread and butter stuff.

Secretly, I have always wanted a “casual” demonstration of these supposed powers-something that could be performed with any deck of cards, at any time!

And, that’s exactly what we have here, in THE XRAY DECK. Steve has done a wonderful job, completely solving the problem-creating a practical, perform anywhere solution for the effect. He’s then gone on to clearly and concisely detail every nuance of his clever and direct method.

The performer removes a deck from the case and gives it a complete shuffle. He thumbs through the deck to demonstrate that all the cards are different, and the deck is complete. Placing the deck on the table, he instructs the spectator that he will leave the room. While the performer is gone, the spectator is to cut the deck anywhere with a simple cut, turn the card cut to face up, memorize the card, and put the cut off portion back on the deck, leaving the selection face up. The spectator is then to take the deck, put it in the case and seal the case, leave the cased deck on the table, and signal the magician to return to the room. The performer leaves the room, the spectator does as instructed and the performer returns.

The performer explains that he has developed an uncanny ability to see the hidden-almost a type of X-Ray vision. Without ever touching the case, the performer focuses an intense gaze on the boxed deck. Much to the astonishment of onlookers, he reveals the name of the card that has been inverted!

But now things get even crazier. He again focuses his gaze on the box, and finally calls out a number. Again, he never touches the box. He instructs the spectator to take the cards out of the box, and deal the cards one at a time onto the table face up, counting for each card dealt. Tension builds as the spectator nears the number called. When the number is reached, there is the spectator’s face up card! Not only has the performer accurately perceived the chosen card in a deck sealed in a box, but he named the actual position of the card as well!

Here’s what some professional mentalists and scholars have said about THE XRAY DECK:

“Ben Harris and Steve Shufton’s X-Ray is, I think, one of the three best card effects to come out this decade. It’s so unbelievably smart, and I use it all the time.”

“X-RAY is one of the most fantastic effects I have come across. I like simple, easy-to-perform effects that require subtlety and sleight of mind rather than sleight of hand. This is an effect that Al Koran would have been proud to have invented. I can not wait to perform it and I know it is going to become a magical classic.”

“Not only did I immediately absorb every last detail and nuance employed in the development of the X-RAY routine, I was blown away by the number of well known and respected names I encountered that had a collaborative role in its construction. X-RAY is an extremely powerful and entertaining effect. Watching Steve Shufton and Ben Harris concoct a recipe for a satisfying and delicious mental effect is as sweet as the frosting on my cake. Do I like it? You bet I do. Highly recommended.”

“A wonderfully clear cut plot. This is very powerful and appears utterly impossible.”

“X-RAY is an amazing effect that also ENTERTAINS the audience. I know the professional performers, with dynamic personalities, will love X-RAY. However, I know X-ray will be a miracle, even when performed by average magicians, just for their friends.”