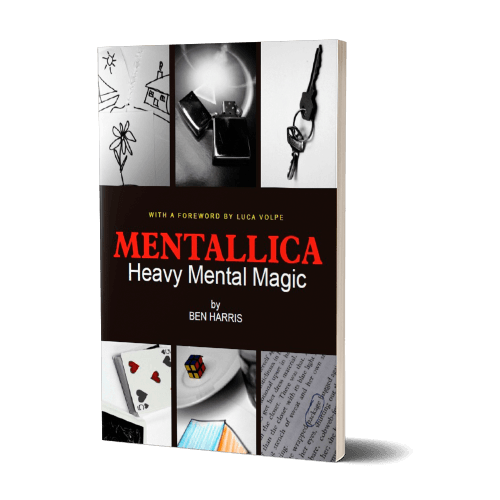 Mentallica is a series of hard-hitting effects drawn from Harris’ one-man show: Hellucinations.

The majority of effects are NEW PRESENTATIONS and uses for existing props like: The Mother of All Book Tests, Looch’s Area Book Test, Glance, Promystic’s Multi-Dimensional (and MD Mini), Nitinol keys (like Elusionist’s, Shift), and even Chris Congreave’s amazing Zippo gimmick: Light.

Mentallica will give you entirely new presentational concepts making all of these effects appear NEW, FRESH and ORIGINAL. We explore Woodstock (yes, flashback to 1969), X-Ray Vision, enhancement of the bending effect, Three-Dimensional “Remote Viewing,” Drawing Duplication, Any Card At Any Number, even the “Cold Reading” of automobiles!

Harris tips the exact DRAWING DUPLICATION used on his infamous Uri Geller debate, televised via satellite in the late 1980’s. It uses NO GAFFS and looks exactly like the effect Uri has performed on talk-shows since the late 1970’s.

Ben also re-visits his most recent release, A Thought Well Stolen — providing his ‘director’s cut’ — leaving the impression that only ONE DECK has been in play. The refined handling enhances the ACAAN portion of the effect, ditching the flashy finale. It also leaves the spectator with a little gift. Routined for the serious mentalist.

EBOOK BONUS: You will also receive the manuscript: Remote Control. Previously only available on special request this 12 page, photo-illustrated, booklet explains an amazing demonstration of “Remote Viewing” using Promystic’s Multi-Dimensional in combination with a mint box and dollar bill.