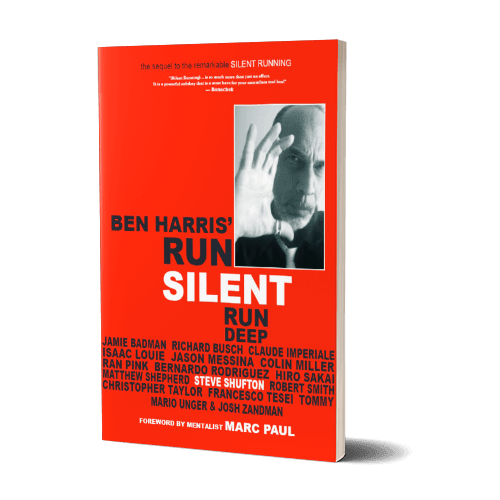 A must have for your mentalism tool box.

Banachek was certainly spot on the money when he said: “Silent Running is so much more than just an effect. It is a powerful subtlety that is a must have for your mentalism tool box!” This book is the proof of the pudding. Over 200 pages of exciting material from around the world. Contributors include: Steve Shufton, Jamie Badman, Colin Miller, Richard Busch, Ben Harris, Claude Imperiale, Isaac Louie, Jason Messina, Ran Pink, Christopher Taylor, Hiro Sakai, B. Smith, Tommy, Marc Paul, and more…

“The whole process is incredibly clean and works like a charm. It’s a great step forward in prop-less mentalism…”

“Wow, what a tome you’ve created! I never imagined that this could lead to so many things…”
– Greg Arce

Firstly, Run Silent Run Deep answers the critics of Silent Running with an in depth breakdown of the Silent Running procedure by Steve Shufton. Here are the professional nuances allowing everyone to effectively deliver the goods. And, then it delivers the performance material. Routines with cards, invisible dice, diaries, cell-phones, and more. Writing on cards, cards to pocket, transpositions, vanishing thoughts, and more. From close-up to stage, you will find some amazing material within these pages. Check out the contents:

Foreword by Marc Paul (with an include effect)

A Force In The Shadows
A critical examination of the Silent Running Procedure with the intention of providing the nuance and understanding to ensure a convincing execution.

Script Stripped
The bare guts of the script with commentary removed. Learn this!

Hands Off: Silent But Deadly
Steve’s treatment of the Brainwave effect allowing the entire routine to carried out in the spectator’s own hands. The performer NEVER touches the deck.

Speechless: Left Unsaid
Picking up where “Speechless” left off, Steve teases out extra nuances and proposes multi-key sets for simultaneous use.

Silent Past
A charming effect, complete with printable photos to add to your wallet. One of Jamie and Colin’s classics, given the Silent Running Treatment.

Silent Future
Combining Silent Running with Greg Rostami’s iforce has never been this sweet. You deserve an iphone, just so you can perform this!

SIR Richard Busch’s Think-A-Card
Richard takes us on a different journey, one with a “nod to the dodge” and a different brand of digital finesse.

Silent Travelers
Two “thought-of” cards appear in an isolated packet. A full-on routine worthy of stage or formal presentation. Explores the use of an Osborn inspired count procedure.

Vanishing Thought
Continuing to explore “packet concepts” the author details further applications and ideas, this time, with the Elmsley Count at the heart of matters.

The Deck At The Other End (DATOE)
The polar opposite of the CrossRoads Deck. Instead of any card in the CrossRoads Set being absent, to the count of 51-with this deck-there’s always a duplicate of the “thought-of” card, and a count of 53!

Easy Transposition
Another “feature” routine that plays wonderfully on stage, formally, or under casual performing circumstances. Possibly one of the easiest and most convincing transpositions of a “thought-of” card (this side of the CrossRoads).

Headway
A wonderful property of the Deck At The Other End is revealed and it’s uses pondered. Imagine having a duplicate of ANY “thought-of” card, immediately at hand. Well that’s what this is all about-that kind of POWER.

R.E.M.
The Headway principle is applied to create a formal and powerful “simulation” of the acclaimed “Berglas effect.” A card is “thought-of” and any number between one and fifty-two is named. You don’t need me to tell you happens next…

Neuro-Pathway
This is a new tactic for Direct Mind Reading (Silent Running, 2010). It eliminates what some considered an “iffy” bit, and leads you directly to the specifically “thought-of” card for a full-on “neuro-blast” of a finish.

Silent Faro
An impromptu method for setting any borrowed deck for a lovely demonstration of pure thought reading. Using Faro shuffles, of course.

Silence of the lambs
Having your entire audience turn their cell phones OFF (as part of a routine) is sheer genius. And, that’s just the beginning! Crazy and effective magic!

Waking Dreams
Months, days, and events (lucid dreams) collide in this wonderful application of Silent Running Principle to the “Diary Effect.” So many possibilities revealed here!

The White Room
Just you and the spectator, sitting in an “all white room”. She is asked to imagine the walls of the room changing color…

ICAINU
“Imagined Card at Imagined Number Unspoken”. The title says it all. This turns The White Room into a physical entity, with cards in hand.

Silent Solstice #2
Quite independently of Christopher Taylor (see above) Bill concocted his own mating of Silent/Solstice. From an entirely different angle, and sweet as can be.

Numb-blur
I have no idea what sparked this, but Bernardo decided to number the backs of his cards with pen, and apply Silent Running. Great result!

Notes on Silent Running
Hiro-san notes the language barrier with Japanese audiences and povides a well thought out solution and in depth routine.

Screaming Walking
Matthew has a certain way of going about things. A certain attitude. Here’s how he and the ideas in Silent Running meshed.

Silent Running For Stage
Italy’s Francesco Tesei takes us behind the scenes with his full blown stage presentation. Lots of wonderful ideas here.

Thought-of Card To Wallet
A direct way to ensure your CrossRoads Set always falls into a “cop-able” position. Ideal for “Card To Wallet” workers.

Silent Frixion
The clever use of a FRIXION pen assures you have a magical “out” no matter which of the CrossRoads “pair” a spectator has chosen.

Starman(Ben Harris)
Silent Running applied to the solar system, galactic events, and the special star maps of Dr Elmer William Bishop. Complete with “Star Deck” templates so you can print this out on your home/office printer.