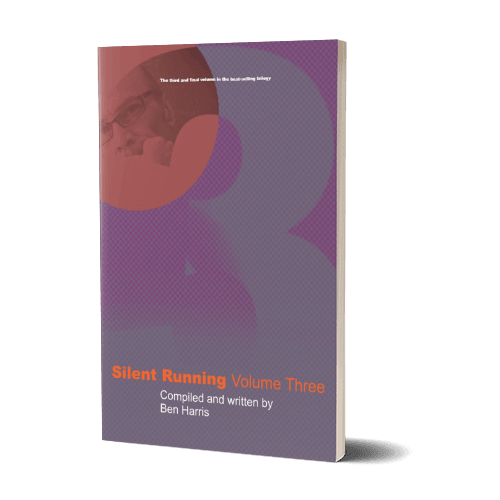 The last chapter of the SIlent Running Trilogy.

The eBook Silent Running 3 picks up where the second volume, Run Silent, Run Deep, left off: That is, it is brimming full of novel applications of both the CrossRoads and Silent Running principles. You need to be familiar with these procedures (as taught fully in the first two volumes of the trilogy).

Part One of this finale jumps in at the deep end with some stunning and clever contributions. Novel ideas including making an “X” appear on the back of any “thought-of card” (a card generated by having the spectator create a card in his head via the SR process) or applying the SR principle to gospel magic or Ten Pin Bowling. OR: How about making the name of a “thought-of” card appear in the steam from a spectator’s breath, or mind-reading a word written on the back of a card! This first section of the book also addresses new ways of both selecting a number and a suit during the Silent Running procedure. Lots of food for thought – great ideas and tweaks that you will apply.

Part Two is a full and in-depth essay on the CrossRoads/Silent Running principles from a thoughtful and deep-thinking friend, Mark Trudinger. Mark approaches SR from a disciplined “Marshall arts” background and explores previously unseen nuances. His quest is to give full control to the spectator, and that includes exactly what will happen with the “thought-of card”. Prepare for a roller coaster ride and to learn several wonderful handlings/effects along the way.

Part Three presents a new force application (IONIC) based on Ray Hyman’s original finger force from 1953. This quirky little adjustment has made the approach fit CrossRoads/Silent Running like a glove. Some hard-hitting applications are taught including “SILENT WITNESS” which is a solution to the “Golden Moment” as originally proposed in the CrossRoads book. (In effect, a card is placed face down upon the table. A spectator creates a card in his mind. No one else knows what it is. This card matches the card placed on the table at the beginning of the effect). No card switches. It’s a clever and very fair solution that we’re sure will become one of your most requested pieces. Ideal for close-up, stage or anywhere. Special template to print out the “secret something” is supplied.

“RAZOR” is another standout in this suite of stunning effects. Imagine a spectator “thinking-of” a card and then having him cut to his “thought-of” card without ever touching the deck! You don’t even need to know what card he “thought-of” – it’s automatic. This will go into your “A” List!

A more detailed look at the contents:

What the professionals had to say about Silent Running:

“This is so much more than just an effect. It is a powerful subtlety that is a must have for your mentalist toolbox.” – Banachek (USA)
“Crystal clear and absolutely mindblowing!” – Martin Adams (UK)

“If you are seeking the holy grail of truly prop-less mentalism then you NEED to get this routine. Ben’s thinking has always been unique and here he excels himself!” – Marc Paul (UK)

“Silent Running describes a very clever principle that enables the performer to almost instantly ascertain the identity of a card merely thought of. The Card Stabbing routine made possible by the principle is the most powerful I have ever seen. I highly recommend Silent Running to serious students of the art as well as to professional workers.” – Bob Cassidy (USA)

“The Silent Running approach takes things into the realms of real mind reading. I love the newspaper card stab as it has the perfect combination of drama and impossibilty. Great stuff.” – Peter Duffie (Scotland)

“This is going to become the best effect of 2010 and possibly of the decade…The genius magic engineer Ben Harris has done it again.” – Chris Wasshuber (Lybrary.com)

“The perfect effect for those times when someone says,’Do Something,’ and you have nothing with you. With this effect, you need only your mind.” – Devin Knight (USA)

Be the first to review “Silent Running 3” Cancel reply