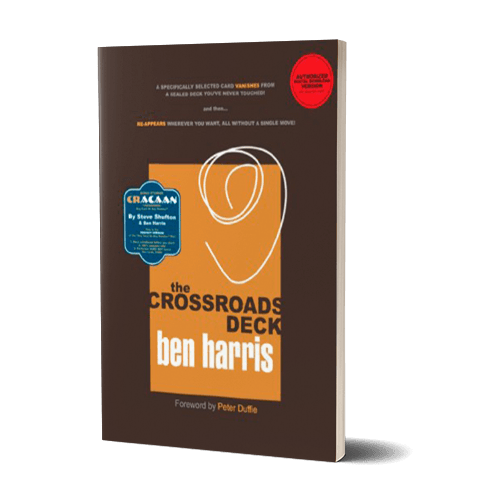 An easy vanish and the re-appearance of a chosen card.

A spectator is handed a cased deck with the promise that the performer will not touch it!

The performer also places his wallet on the table, “This is my money trick…” he explains*. Two spectators are asked to assist. Together, they decide upon what appears to be a “freely chosen card.” In this instance, we’ll assume they decide upon the “Seven of Hearts.” The performer now invokes his magic, and the selected card is brought under his spell-from a distance-by these magical passes and incantations.

Reminding the audience that he has not once touched the cards, the spectator holding the cased deck is instructed to remove the cards from the case and to count them “OUT LOUD, one at a time, FACE DOWN.” He does so and counts only 51 cards to the table! In other words, one card is missing! You can hear a penny drop-“my goodness, could it be…?” Before that thought-and the resulting implications are allowed to fully form-the spectator is asked to turn the cards FACE UP. He is now instructed to specifically locate and remove the SELECTED card. Even with those standing nearby assisting him, he cannot locate the card-it has COMPLETELY VANISHED from the deck!

This amazing disappearance is accomplished remotely-and automatically-without you having to touch the cards. Only ONE DECK is used and it is given to the spectator BEFORE the card is selected. Again, reminding the audience that he’d previously declared this his “money trick” the performer gestures towards-but does not actually touch-his wallet. It’s been on the table since before the card was selected. A spectator is invited to rummage around within. Inside she finds ONE SINGLE CARD. This is the SELECTED CARD!

Note: The performer is free to re-produce the selected (and just vanished) card from a variety of amazing places: inside his wallet, inside his shoe, under his hat, or even a spectator’s own pocket! It’s really up to you. Again, it’s FULLY AUTOMATIC. Can immediately be REPEATED with ANOTHER named card and without any re-set!

SOME THINGS TO CONSIDER

Completely SELF-WORKING (both the vanish and the re-appearance)

You never touch the cards – EVER

Only the one deck used (no more multiple-deck outs)

Spectator can remove card from its final destination

Immediately repeatable (ideal for walk-around, or the streets)

Chosen card can appear in your wallet, shoe, pocket, or anywhere – you decide*

Steve Shufton has cunningly applied the “Crossroads” concept to the “Any Card At Any Number” plot and come up with one of the most perfect handlings ever. A card is named, a number is named. The chosen card appears at the nominated number and the performer NEVER ONCE TOUCHES THE DECK. Only the one eck used, and it’s out on the table BEFORE you start.

You receive the gloriously produced 36 page PDF ebook, with introduction by Peter Duffie. Use your own cards, no specially printed or produced cards are required.

“I’ve been exploring versions since the mid-1970s and enjoyed your thinking on this.”
– Max Maven

“This is going to FRY a lot of people…” – Richard Kaufman

“This is so devious – created with an incredibly sharp magic scalpel – that I predict this to become an instant classic.” – Chris Wasshuber

“We’ve just had the pleasure of previewing a draft of what will be called The Crossroads Deck, by Ben Harris. Thorough crediting supports a pleasing mixture of psychologically innovative applications of time tested themes as well as familiar approaches that both captivate and entertain. Well written and easy to understand, Mr. Harris’ basic method and impossible vanish and reappearance routine are magnified by the fact that the deck is not touched by the performer!

“A second effect by Steve Shufton logically extends the possibilities. Properly done, a thoughtful, capable performer will be remembered as having demonstrated an Any Card At Any Number, again, where the untouched deck is handled only by the Participant in a very simple, straightforward way without any prior preparation.

“This is potentially a very strong impression to leave with any audience. The “Crossroads Technique” alone, which we really like, will be seen as food for thought by many. As mentalists, our variation would be to use no deck at all. Just a single, thought-of card in the pocket. The solution will dawn on you after reading the text.”
– Richard Busch & Larry Becker

“There are two main features here; a named card vanishes from a sealed deck that you never touch, and the card is found at an impossible location of your choice. Causing any card to vanish from a deck under such impossible conditions is not an easy problem to solve. However, Ben has hit on an elegant solution, and what’s more; the whole thing is technically self-working. If you’re looking for a direct and powerful card effect, you’ll love this. And, if you enjoy experimenting and exploring the ins and outs of a trick, you’ll love this even more because the possibilities seem endless…”
– Peter Duffie (from the foreword)

4 reviews for The Crossroads Deck